In May of 2002, New Life Church was born. Our first services were held in the Community Room at First National Bank in Jasper, TX. Two months later, New Life church moved to a store front that was previously Jim’s Western Store on HWY 96 North. The Lord richly blessed in those early days. New Life Church continued to see growth and enjoy the blessings of God at this location for the next 3 years.

Finally, the church had reached a point that we needed a new facility. The Lord opened the door for us to be able to purchase a new church in 2005 at 1200 N. Bowie St. Formerly a Nazarene church, we immediately remodeled the sanctuary and had our first service on Easter of that year! We financed the church for 15 years but God helped us pay it off in 5 years! To God be the Glory!

The Lord has blessed us richly since the beginning! We have experienced tremendous revival with many baptisms and many being filled with the spirit. Our church has grown and matured spiritually. We have a thriving Sunday-School, a vibrant youth program, a dynamic music department, and much more! To God be the glory!

We are excited about our future! We believe that our story has only just begun. It’s amazing to see what God has done thus far but we are even more excited about what is yet to come in Jasper through New Life Church. We would love for you to be a part of that story. Come join us!

OUR VISION
"To connect people to God through love, evangelism, teaching, and worship."

OUR MISSION
"Evangelism is our mission. Jesus established the church to proclaim the transforming power of the gospel. It is our mission to reach the people of Jasper, Tx and surrounding areas with this message."

We have 4 core values that make up the fabric of New Life Church.

We must connect to God and one another through love, discipleship, and fellowship.

We strive to continually grow in faith.

We commit to display God’s love through serving God and others.

Standing still is not an option. We must go and make a difference. 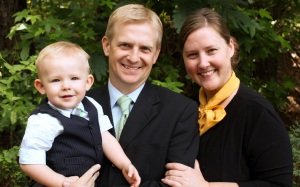 When I was 5 months old, my father went on the evangelistic field full time. For the first 5 years of my life, I was in church 5 to 6 times per week. From a very early age, I believed in the power of God and had seen many great things in the kingdom of God.

At the young age of 8, I received the baptism of the Holy Ghost during a revival in Fields, LA. I was baptized in the name of Jesus a few days later in my Grandmother’s “claw-footed” cast iron bath tub. It started me on a path to serving God that has led me to see many great things in the kingdom of God.

While attending Holiday Youth Convention at the age of 16, I acknowledged my call to the ministry. I preached my first message in Anacoca, LA a few months later. The Lord continued to bless and open doors. At 19, I went on the evangelistic field full-time. For the next 5 ½ years, I evangelized across the US seeing many lives changed and experiencing the great blessings of God.

After 4 years of evangelizing by myself, on March 1, 1997, I was married to my wonderful wife, Lauralee Burks. We were on our second mission trip to Colombia, SA in 1998 when God began to deal with us about a change in our lives that was to come. While preparing to speak at the graduation of the Bible College students in Cali, CO, God began to deal with me about attending Bible College.

In August of 1998, we sold all of our possessions except a small little house that we owned. We left for Stockton, CA to attend Christian Life College. The next 4 years were a tremendous time of learning and experience that helped set us on a course for greater things in the kingdom of God. I was privileged to serve as Student Body President the last two years we were there. I was blessed to graduate at the top of my class in 2002 with a BA in Theology. My wife, Lauralee, graduated with a BA in Music and Applied Piano. Since that time, she has also earned a BA in Child Development with a Minor in Education from Hope International University.

In August of 2002, we came to Jasper. Services were first held in the Community Room of First National Bank. We quickly moved to a store-front that used to be Jim’s Western Store. We remained there for 3 years when we were able to purchase a former Nazarene church. After 6 weeks of extensive remodeling, we held our first service at the new facility on Easter Sunday 2005.

The Lord has blessed us to grow a great church here in the past 16 years. We are privileged to pastor the greatest people on earth at New Life Church! We are continuing to plant the seed and see God bring the harvest. The future is bright! It’s an exciting time to be working for His Kingdom!